HomeStoriesUniting to stop indefinite detention in the UK

Uniting to stop indefinite detention in the UK 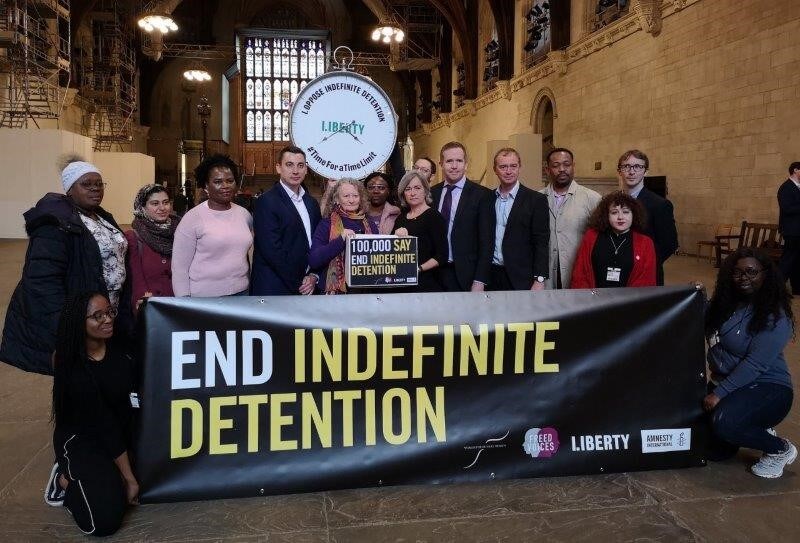 Around the world, immigration detention is increasingly imposed, not as a ‘last resort’, as required in international law, but as a routine tool of migration management. The International Human Rights Programme partners with organisations in the US, Europe and the UK that work to uphold fundamental rights governing the deprivation of liberty. This includes due process, judicial oversight, humane conditions and, increasingly, alternatives to detention.

The UK is the only country in Europe with no time limit on immigration detention.

The documentary featured Alif, who initially came to the UK on a student visa. He had lived in London for 16 years at the time of broadcast, when he was in the process of applying for asylum. In his home country of Pakistan, Alif was a qualified doctor. In the UK, he had worked as a trainee audiologist in a London hospital. In a moving testimony, he recounted his immigration experience in the UK – his detention and release three times since his student visa expired, his fear of detention and of being re-detained. Alif is just one of nearly 25,000 people[1] who pass through the UK’s immigration detention system each year. Detainees include: vulnerable asylum-seekers; those with ‘irregular’ status; and those with a criminal record facing deportation.

The decision to detain is taken by officials. It is administrative and generally not subject to judicial scrutiny. “While a minority of people in detention will have previous convictions, crucially, all will have served their criminal conviction in a prison before being moved to the immigration centre,” says James Wilson, deputy director of UK charity Detention Action. Unlike people charged with a criminal offence, there is no automatic legal advice or representation to challenge immigration detention. In many respects, the system affords detained migrants even fewer rights than a criminal defendant.

“There are currently seven immigration removal centres around the UK. There are varying levels of security but they all operate as prisons – some of them were former prisons. Everybody being held there is being held purely on reasons of immigration administration,” says James.

The 2018 ‘Windrush Scandal’, in which long-term residents from the Commonwealth were unlawfully detained and deported, brought into sharp focus the human consequences of the government’s explicit ‘hostile environment’ policy for immigrants. “The Windrush scandal really shifted public perception of immigration policies in the UK,” says Steffi Dawoud, communications and media manager at IMiX, a London-based communications hub. “It helped the public to understand how grave the hostile environment is.” For instance, people without legal status in the UK cannot rent property, work, or send their children to school. In addition, they are detained, sometimes indefinitely, in one of seven detention centres around Britain.

That scandal, alongside the 2017 Panorama documentary, gave real traction to the advocacy efforts of our partners, prompting two influential Parliamentary Committees to undertake inquiries into immigration detention. Both criticised its indefinite nature and called for change. A former Prisons and Probation Ombudsman, Stephen Shaw, also condemned the UK immigration detention system as ‘dehumanising’. A public inquiry has now been launched into the mistreatment of detainees at Brook House.

Oak’s grantee Detention Action has been critical in developing pilot alternatives to detention that focus on individual case resolution. For the last five years it has run a project in which immigrants are placed in community care instead of detention, where they receive emotional and practical support. Nearly 95 per cent of project participants do not re-offend in terms of criminal acts. Similar pilot projects are being rolled out by Oak partners across Europe.

In addition, the collective efforts of our partners successfully garnered cross-party support for an amendment to the Immigration and Social Security Coordination (EU Withdrawal) Bill, which set out a 28-day time limit to immigration detention. The Bill in this form never came to a vote due to political upheaval in 2019. Our partners remain committed to seeking ways to implement the amendment’s measures in the new parliament, and to securing a strict time limit to detention with robust judicial oversights.

We are proud to support our partners. Their collective impact extends beyond redress for thousands of vulnerable detainees to the reform of a harsh and unnecessary detention regime. Watch the video on our online annual report (due to be published in May 2020) to hear what some of our partners have to say about the subject. You can also read more about Oak’s Programme strategy for International Human Rights here.