HomeStoriesSupporting women to stand up to violence

Supporting women to stand up to violence 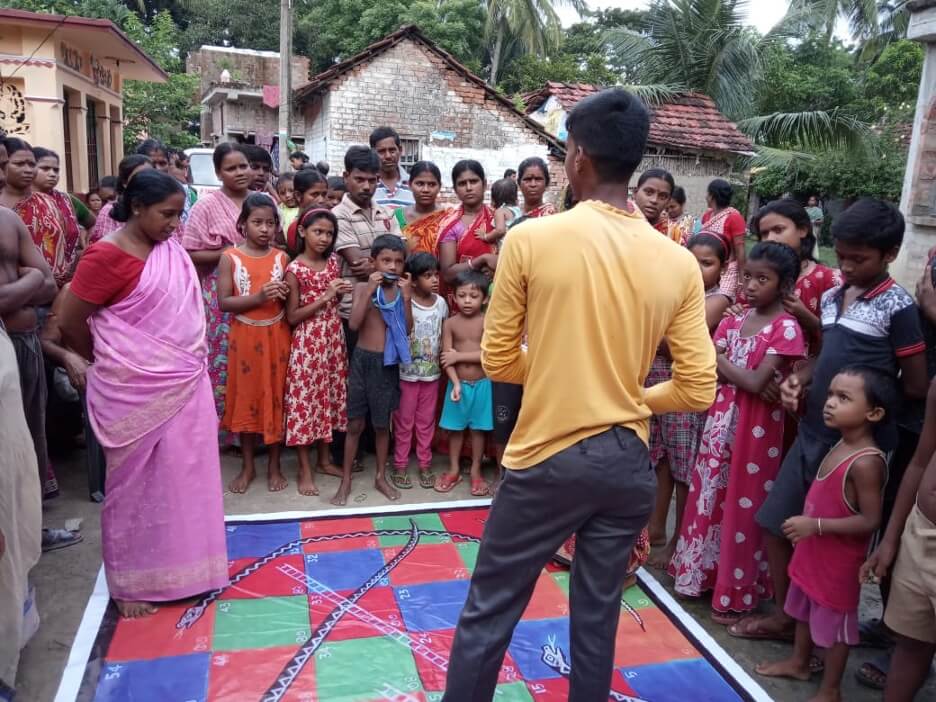 Everyone should be able to live a life free of violence. Swayam is a not-for-profit organisation that provides holistic support services to women survivors of violence and their children, and facilitates their empowerment. It works with communities in rural and urban districts of West Bengal, India to empower them to live violence-free lives and enjoy their socio-economic rights and entitlements.

Swayam’s preventative work involves building the capacities and leadership of groups of women and young men to advocate for gender equality in their own communities. Swayam assists women and girls to claim their rights and entitlements and supports them to navigate through the courts and police to get justice. Swayam accompanies women survivors to become agents of change, so that they find the courage and confidence to not only take control of their own lives, but also to engage in social actions that inspire other women in similar situations to overcome violence.

Two extraordinary events occurred in recent years, which increased risks to women and girls who were already living in risky situations. The first was the outbreak of Covid-19 and the subsequent lockdown, which forced people to be restricted to their homes. The second was the devastation caused by a cyclone which badly affected the southern districts of West Bengal. These two events have caused permanent damage to communities, and have affected their incomes, food availability, and access to primary healthcare, as well as services and entitlements. For women and girls, the restrictions on mobility meant that they were unable to access support services, despite increased risks to emotional, sexual, physical and economic violence.

“In fact, the cliché “stay home, stay safe”, coined to prevent the spread of the Covid-,19 virus, led to an increase in the scale, frequency, and intensity of violence against women in their purportedly “safe” homes,” says Anuradha Kapoor from Swayam. “It severely limited women’s ability to escape violence and access help though their support networks. Restricting factors included constraints on mobility, paucity of transport, and lack of access to a phone or the ability to recharge it, all compounded by the constant presence of the abusers at home.”

In response, Swayam opened three mobile helpline numbers and then quickly increased that number to ten. The organisation broadcasted the numbers far and wide to peers and survivors, and through social media and satellite channels. These helplines provided counselling, safety planning, family counselling, legal advice and referrals to hospitals and private doctors. One of the helplines provided survivors with dedicated mental health services. Anxiety about Covid-19 and increased violence, compounded by financial insecurity had taken a critical toll on their mental health. The team also supported survivors to register police complaints when fleeing abusive families.

Between August 2019 and September 2020, 2,040 survivors from 11 districts in West Bengal accessed Swayam’s services through helplines, which is more than double the number they reached out to in the previous year. In addition, women from 11 states from different corners of India availed of Swayam’s services. 22 per cent of all new cases coming directly to Swayam were referred by survivors Swayam had worked with. Swayam helped 64 per cent of the 439 women who requested legal advice to file cases with the police stations and courts. Widespread fear of stigma often prevents women from reporting their abusers, so this is a critical accomplishment.

In addition, 2,707 individuals, of which 60 per cent were women, accessed social security services and legal entitlements to food rations, cash transfers, job cards, insurance and pension. This is six times the number of persons who secured access to these entitlements the previous year. At the community level, 289 women’s groups and 79 groups of men and boys have stepped up their efforts to promote violence-free communities. Approximately 200 cases of violence against women were dealt with by some of these groups, and another 127 were referred to Swayam. Caseworkers from 44 civil society organisations and networks drew upon Swayam’s training on strategies to provide survivor-focused support services and knowledge of the the legal system. Swayam also developed and shared useful resources for organisations working with survivors.

“Swayam stood as a solid support and helped me become emotionally strong and understand the legal steps,” says one woman who received support from Swayam that enabled her to claim her entitlement to maintenance from the court. “In this difficult phase of mine, Swayam stood by me as family. When I had anxiety attacks, Swayam provided me with psychological counselling. I was also provided with legal advice by a good lawyer. I can never forget what Swayam has done for me to help me become a strong person and come out of the mess I was in.”

Oak Foundation supports the work of Swayam through our India Programme, which works to support equitable opportunities for all, because we believe that everyone should have a fair chance at creating a life for themselves. Read more about the programme strategy here. Swayam is a feminist organisation committed to advancing women’s rights and ending inequality and violence against women and girls. It empowers women survivors of violence, and enables them to become self-confident, self sufficient and self-reliant. It also generates discussion, debate and action in society to challenge social norms. If you want to know more, check out Swayam’s website here.