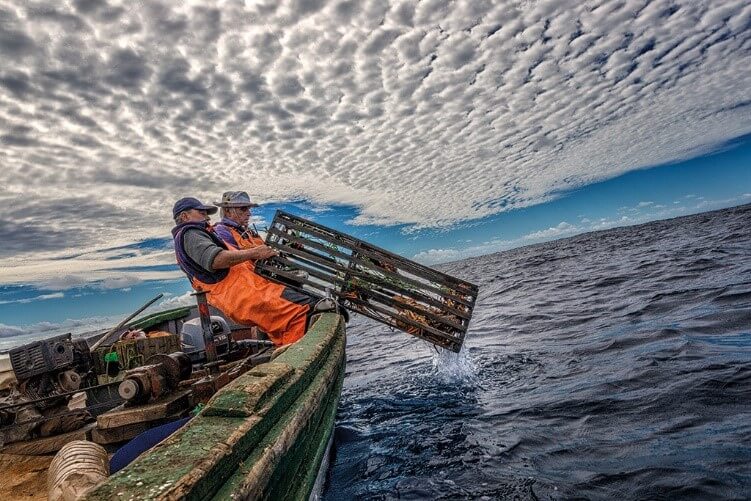 In July 1992, a group of angry fishermen stormed the hall at the St. John’s Radisson Hotel in Newfoundland, Canada, and in a dramatic, public demonstration of their fury, tried to break down the doors. Film footage from the time depicts security guards jamming the door handles from inside with the legs of a chair and radioing for police support.

All of this came about following an important announcement from federal fisheries minister John Crosbie, who, along with the press, was in the room that evening. From midnight that night, there would be a two-year moratorium on commercial cod fishing in Newfoundland and Labrador. All fishing vessels were ordered to pull in their nets.

The entire Newfoundland cod industry collapsed overnight. The cod moratorium left at least 30,000 fish-workers very suddenly without a job, hence the fury of the fishermen.[1] Later, the ban was dubbed by some as the “biggest layoff in Canadian history”. The once abundant cod stocks that had brought European settlers over to Canada a few centuries earlier – and said to be so plentiful that you could walk across the water on their backs – had sustained local economies and people for 500 years. Now, Atlantic cod had reached its lowest levels in history along the coastal waters. The purpose of the ban was to allow the dwindling cod stocks, nearing extinction, to recover.

“This situation is really unprecedented in modern Canada,” Fred Morley, an economist with the Atlantic Provinces Economic Council in Halifax, told the Hamilton Spectator at the time. “The only thing you can compare this to is the dust bowls on the Prairies in the 1930s.”[2]

The dustbowls are a good analogy, and if there has ever been an incident in history that demonstrates how we should better manage the earth’s natural resources, it is the Newfoundland moratorium. Initially put in place for two years, it was believed that cod stocks would rebound by the end of the century. Leading environmentalists estimated that the once-plentiful stocks of Atlantic cod would need at least 15 years (the cod’s natural lifespan) to get back to historic levels. Sadly, in 2019, the northern cod stocks are still at critical levels, some 28 years later.[3]

According to Joshua Laughren, executive director of Oceana Canada, there are ways to manage the resources of the ocean sustainably, so that moratoriums become a thing of the past and millions of people can live off the ocean’s bounty for generations to come. “Fish really can rebuild,” he says. “Fish reproduce quickly, or at least a lot of them do, and they can recover, if we give them a chance. And that’s what we’re working on in Canada – to change that history of presiding over the largest collapse of a fishing industry in the world to presiding over abundant fish stocks.”

To Andrew, this success is attributed to its approach. Firstly, it focuses only on the oceans. Secondly, key to its success is hiring local people in the countries where it operates. They are best positioned to know what is best for their respective countries, and they deliver the message to key stakeholders who have the power to implement laws that bring about longlasting, beneficial change for everyone. “The Chileans speak to the Chilean Government, the Peruvians talk to the Peruvian Government, the Filipinos talk to the Filipino Government,” says Andrew.

Joshua of Oceana Canada stresses the importance of only taking out of the ocean what the ocean can afford to give. “If you overfish them, it’s like spending down capital, you burn it all and you have nothing left,” he says. “But if you take only the interest that’s produced every year, you can keep doing that, for year upon year and generation after generation. So, set the right quota, and only take out the amount of fish that the ocean can sustain.”