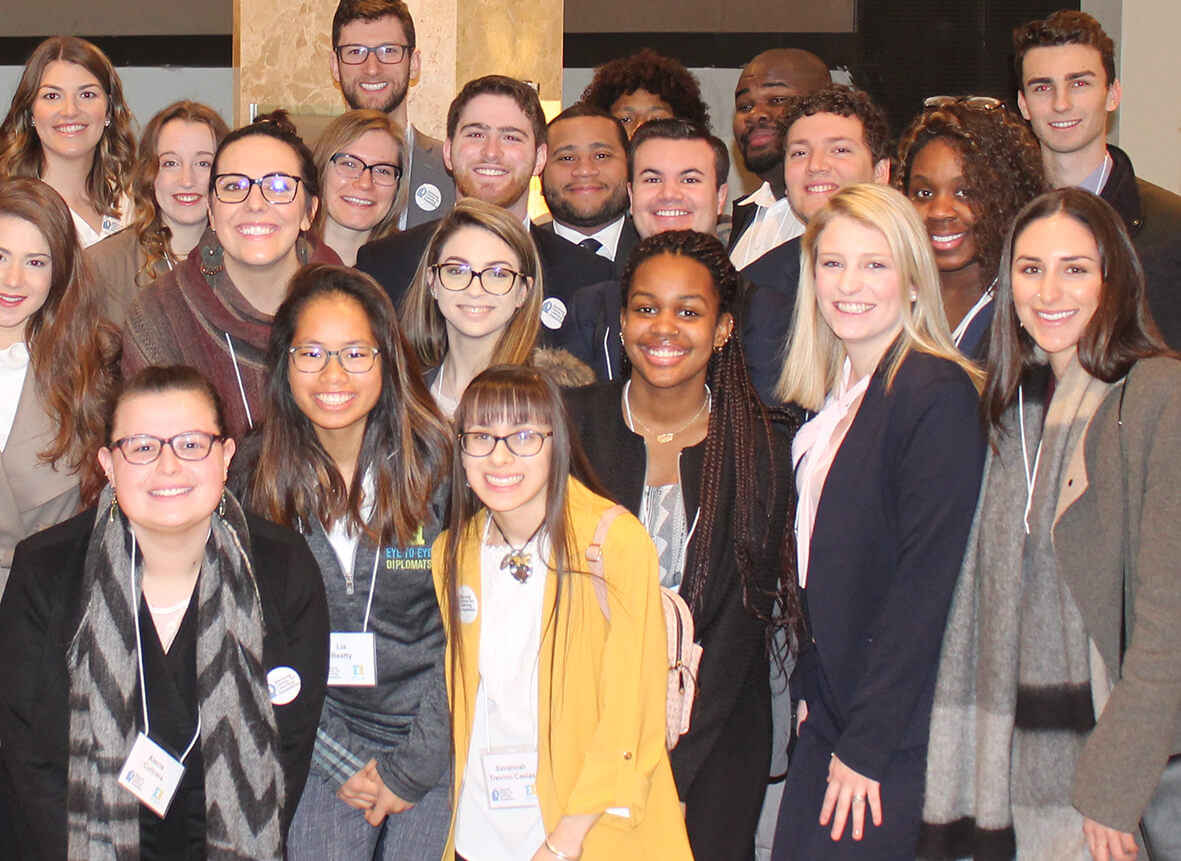 Gavin Lockard had something on his mind as he prepared to fly from his home in Moline, IL, to Washington, DC: “Should I wear my jacket on the plane and let it get a little wrinkled or should I pack it not knowing how wrinkled it will get?”

No detail was too small to think about given the serious purpose driving the college student’s trip to Washington – to lobby the U.S. Congress on behalf of students with learning differences. He was one of 15 young adults picked and trained by Oak grantee the National Center for Learning Disabilities (NCLD) for its #StandWithLD Hill Day 2019.

Putting them in that central role was the essence of #StandWithLD Hill Day, NCLD President and CEO Lindsay E. Jones said. “They are the constituents. They are the voters,” she said. “When they share their stories, that really is the most powerful thing.”

Even with NCLD’s six months of coaching on legislative priorities and the basics of Capitol Hill advocacy, Lockard said the weight of his task hit him when he arrived in Washington and began to see familiar landmarks. “I’ve always been into politics, but it was my first time to be in DC,” he recalled. “Being there, I felt almost starstruck.”

NCLD tasked the young leaders to visit the offices of their hometown member of the House of Representatives and their state’s two Senators to seek their support for three legislative goals: co-sponsorship of the Respond, Innovate, Support and Empower (RISE) Act; full funding of the Individuals with Disabilities Education Act (IDEA), the federal law protecting students with learning differences and providing aid to their schools; and membership in the congressional dyslexia caucus. “It took a lot to make these meetings happen – they did that themselves,” said Robert T. Stephens, NCLD’s government relations director. “They had to navigate the place and the process. They made those asks themselves.”

Lockard’s story was compelling. His learning differences include attention deficit disorder, non-verbal learning disorder and processing speed issues due to a brain injury as a child. “Elementary school was fairly easy, middle school was doable – I was able to pass classes if I worked twice as hard,” he explained. In high school, “I was taking a very reduced course load. It looked like I was going to be in high school forever.” In addition, Lockard and his family believe his Individual Education Plan (IEP), required by American law to guide and guarantee the educational services provided to a student with learning differences, was changed by educators inappropriately and without the family’s consent.

Lockard said he tied his own experiences to the asks he made. The idea that his IEP could be tampered with was “a shocker” to Congressional aides, he recalled. Lockard said he always mentioned his time in high school. “When I said I don’t want people to spend seven years in high school like me, that resonated.”

Education staffers in all three offices agreed to consider the RISE Act, which would require higher education institutions to accept learning difference designations from earlier in students’ academic lives rather than forcing them to be re-evaluated (often at a cost of thousands of dollars that students must bear). Lockard said he has been fortunate that his school, Blackhawk College, has strong disability services, allowing him time extensions to complete work.

Beyond the value of their stories and their lobbying in helping to shift the national conversation, the students’ participation was an opportunity to demonstrate leadership and to experience a sense of community that contrasts sharply with the marginalisation that students with learning differences often experience, Jones said.

Lockard laughed that he has never accepted social media connections faster than those from the other 29 leaders. And he wants more chances to speak out for himself and others with learning differences. NCLD believes the experience on Capitol Hill prepared the young people well to pursue further advocacy at the state and local level.

Next time, Lockard said, he will call far enough in advance to schedule meetings with his elected officials themselves, not their staff. “When you’re in college, you’re learning things obviously, but what is the product, what is the outcome?” he said. “When I was there, it was like, ‘Finally, I’m doing something productive.’”

Oak Foundation believes that the voices of students and families are vital to redesigning education to meet the needs of students with learning differences. When students themselves demonstrate their agency to shape their own education they help shift an inaccurate narrative about learning differences. They also make clear to decision makers the policies and practices that can best support them and learners like them.