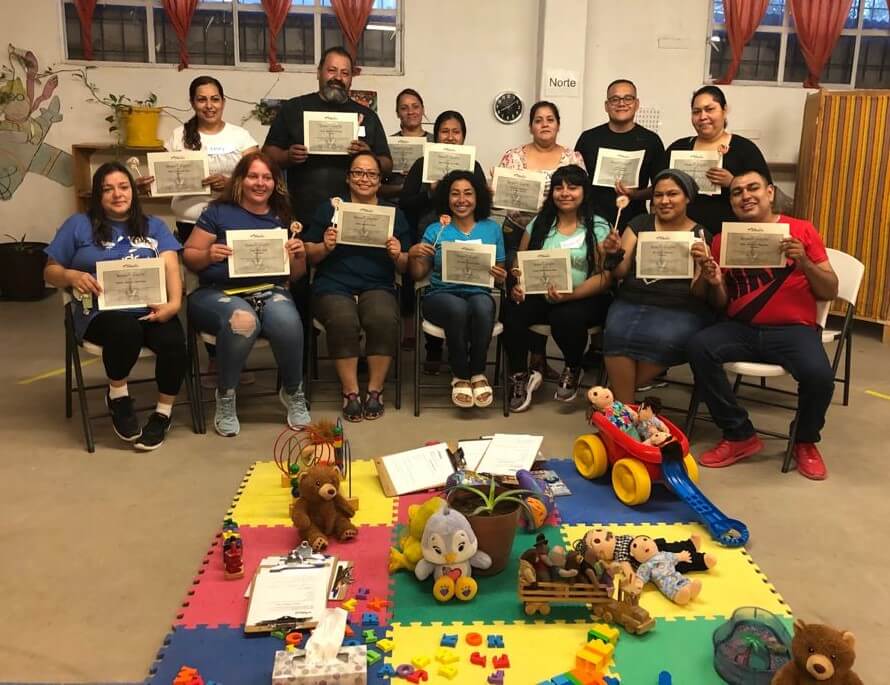 Nestled right on the border of New Mexico in the United States and Chihuahua in Mexico, is the Puerto de Anapra neighbourhood of Ciudad Juárez. Lying in the shadow of an 18-foot-high border fence, Anapra is one of the poorest neighbourhoods in the city, with high rates of violence, low school attendance, poor mental health, low wages, poor sanitation, and lack of services. The majority of Anapra’s 20,000 inhabitants are migrants working in the ‘maquiladoras’, low-cost factories owned by foreign corporations.

Among those determined to tackle the problem at its roots are two former nuns Linabel Sarlat and Elvia Villescas, who were dismayed at the poverty and violence they witnessed daily in their neighbourhood. Together they founded Las Hormigas, which translates as ‘the Ants’, to promote a culture of peace and non-violence among local families, and to help women and children to thrive, despite the challenges around them. “We are not saviours,” says Linabel Sarlat. “This is slow, underground work. It requires patience. That’s why we call ourselves ants.”[1]

Since its inception, Las Hormigas has offered a range of much needed services to the community, which is plagued by femicide and violence against women. Las Hormigas offers psycho-educational, emotional support and a safe, welcoming space. Its services include: counselling women who have suffered abuse and helping them to regain their sense of self-respect; therapeutic workshops that provide adults with the skills they need to solve problems in a healthy, productive manner; and supplementary schooling and speech pathology for at-risk children. “There’s a great need in this community for education – not schoolbook education, but education in rights and solidarity,” says Elvia Villescas.

Back in 2012, Las Hormigas was a tiny endeavour by Linable and Elvia to try to address the impact of systemic violence on the soul and psyche of their community. Fastforward eight years and Las Hormigas has grown to a community-based safe haven for women and their children, with a strong structure that has attracted funding from a range of sources. Las Hormigas helps teenagers and their parents build coping strategies that give them the tools they need to avoid being recruited into gangs and to stop living out violence in their own relationships. It has also created programmes to provide food and peer support to women who are malnourished, and their families.

After 20 years of service to the organisation they founded, Elvia and Linabel will shortly be handing over the leadership reins to a competent new manager. With a background in management, the new manager will bring fresh ideas and a new vision to Las Hormigas to continue building on the robust organisation the former nuns leave behind.

Over the next five years, Elvia and Linabel would like to see violence among adults and children reduced, by helping them to learn to recognise and manage their emotions. They would like to help children read and write, strengthen gender equity in family relationships, and contribute to re-establishing the systemic order in families. They would like to let adults take their place as adults, so that children grow up with guidance and restraint.

“Against hopelessness, there is always hope; there are always spaces of hope,” says Linabel. “And our goal is that the women pick themselves up, and with a clear heart, we create a new social fabric of equality.”

This grant falls under Oak’s Issues Affecting Women programme, which recognises that unequal power relations are created and encouraged by legal, political, economic and cultural systems, and which also believes in their capacity to change. The Issues Affecting Women Programme supports women’s efforts to create this change – to build, lead and grow strong, vibrant and influential movements in order to achieve equity and justice. You can read more about the programme here. You can find out more about Las Hormigas here.