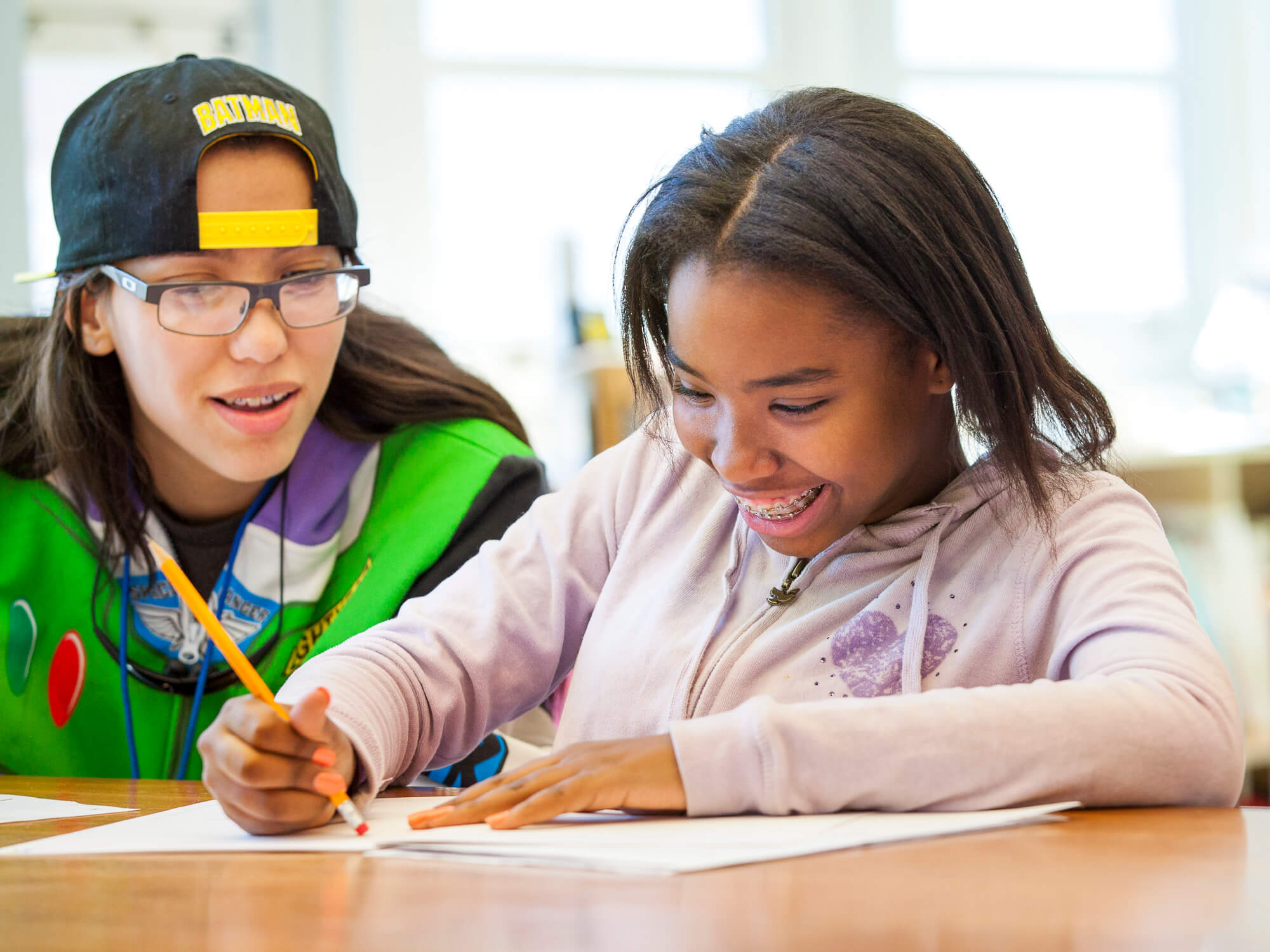 Lia Beatty and Alyssa Tundidor are a continent apart, yet they are trying to build the same sense of community, a feeling of support that they said they missed out on growing up. The college sophomore in Washington and the college senior in Virginia are the chapter leaders at their schools for Eye to Eye, which matches students in fifth through eighth grade with learning differences with high school and college mentors who have similar differences. Eye to Eye has 160 mentoring programs in 23 states involving about 1,800 mentors and mentees.

“When I looked into Eye to Eye, I thought we’d meet with the kids in a circle, maybe talk about the struggles we go through, maybe have some pizza,” Tundidor recalled. “When I found out how structured the mentoring is, I knew I had to be a part of it.”

Mentors and mentees meet weekly for about an hour after school through most of the year, including working on 18 weeks of project-based, social-emotional learning mainly through art.

“The weekly art room is very fulfilling for us and really eye-opening to the mentees to see us dealing with the same things,” said Tundidor, who like Beatty has attention deficit-hyperactivity disorder.

“Art is the modality, but it’s not the focus,” Beatty said, recalling an “invention” she worked on with a mentee in one project. “We came up with a system where all of the vowels had a color – she was having trouble spelling. It really showed her that there are little things that you can change yourself, that you don’t always have to rely on a teacher to change something for you.”

Tundidor said that she wonders what it would have been like to have such a weekly encounter when she was in middle school. “I know exactly what they’re feeling, what they’re experiencing. Our kids just learn differently, and there’s nothing wrong with that,” Tundidor said. “Their brains are moving at a million miles a minute; I know because my brain moves at a million miles a minute.”

In addition to funding Eye to Eye as an organization, Oak Foundation has funded an independent national evaluation of the program by the BrainLENS laboratory at University of California-San Francisco (UCSF). Learning differences are associated with increased anxiety and depression as well as impaired self-esteem and interpersonal relationships. “We showed that self-esteem increased, and depressive symptoms decreased among Eye to Eye mentees after mentoring when compared to students with learning differences who did not participate in mentoring and to students with no learning differences,” said UCSF psychiatry professor Dr. Fumiko Hoeft, who leads the Oak-funded research. “Eye to Eye also seemed to have a protective effect on interpersonal relationships – students with LDs not in Eye to Eye experienced a self-reported decline in interpersonal relationships from Fall to Spring, while Eye to Eye mentees did not. Eye to Eye mentees also experienced significant increases in their self-reported comfort with the LD label, while LD students not in Eye to Eye did not.”

These initial results “show first that there is a need for programs like Eye to Eye and second that Eye to Eye is a promising intervention to address socio-emotional challenges in students with LDs,” Hoeft said. “The key components of Eye to Eye such as identification with a mentor and a community could be integrated in educational contexts in order to improve the socio-emotional well-being of students with LDs.”

Hoeft and Kayle Walls, Eye to Eye’s chief operating officer, said Oak Foundation’s funding of an intervention and its independent evaluation improves both. “This type of support is unique from funders as the expectation is that organizations already have in place the tools, resources and capacity to clearly demonstrate their impact,” Walls said. Through the interaction with evaluators, Eye to Eye has strengthened its own data gathering and measurable outcomes and the improved mentoring curriculum, Walls said. “The refreshed curriculum will deliver more of what we know is working and modify programmatic interventions that we haven’t seen having as great an impact.” The interaction also improves the evaluation, Hoeft said. “Through this partnership, our research lab has grown in developing more informative and translatable questions.”

While Eye to Eye provides a curriculum, training and ongoing support to mentors, local student leaders run the programs and adapt to mentees’ needs. The curriculum calls for each week’s mentoring to end with each student presenting work to the group. Beatty said one group of mentees she worked with was painfully shy in the early part of the year, making the group presentation a frightening prospect. She and her peers found an alternative that still involved presenting the week’s work.
“Instead of us trying to place this end point on them, we’re flexible about it – it’s about the process,” Beatty said.

Oak Foundation fights against themisconception that students with learning differences cannot succeed academically and values the role of social emotional learning as schools prepare students for the adult world. Oak partners with Eye to Eye and others to demonstrate the vast possibility these students represent and with researchers such as those at BrainLENS to uncover insights into the most effective ways to support students with learning differences.